Rahonavis is a dromaeosaurid dinosaur that lived during the Late Cretaceous[73-67] in Madagascar.

It had a very minor role in the episode.  A pack of Rahonavis was seen near a desolate, rotting carcass.  A family of Majungasaurus scared them away so that they could eat.  One Rahonavis bravely picked up a chunk of meat from inbetween the adult Majungasaurus's legs.  More attempted to eat but the Majungasaurus scares them off with a loud roar.  The pack scurried away as an adult male Majungasaurus came towards the carcass.

A Rahonavis between a Majungasaurus' legs.

A pack of Rahonavis scurrying away.

A rear view of a Rahonavis. 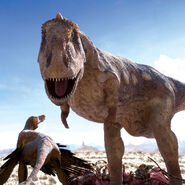 Rahonavis scared of a Majungasaurus
Add a photo to this gallery
Retrieved from "https://planetdinosaur.fandom.com/wiki/Rahonavis?oldid=11942"
Community content is available under CC-BY-SA unless otherwise noted.