Argentinosaurus was a titanosaurian sauropod dinosaur from the Late Cretaceous period.  [101-89]

Argentinosaurus appeared in the episode "New Giants" as one of the primary focuses of the episode (the others being Paralititan, 'Mapusaurus and Carcharodontosaurus).

This episode begins by showing several nests of Argentinosaurus eggs being eaten by a Lacusovagus and a Skorpiovenator. The mothers arrived and drove off the predators. The adults then started eating and laying their eggs. The hatchlings however, either ate as well, or got eaten instead - these dinosaurs do not really take care of their young. A whole pack of Skorpiovenators kept on eating the babies but with thousands of eggs, it had little impact. The adults eventually left, though a Mapusaurus followed.

The herd of Argentinosaurus were on the move. A colony of Gasparinisaura (identified as Hypsilophodont) travelled with the herd but were in danger. The sauropods' steps churned the surface into quicksand, causing the deaths of many dinosaurs. The herd eventually stopped travelling and began to feed. But then, a pack of Mapusaurus

arrived and picked a victim. The pack snacked on the victim but then stopped. One Mapusaurus got careless and got too close to an adult Argentinosaurus and got trampled on by the irate giant. Argentinosaurus relies on its sheer size, in order to oppose the thought of mapusaurus attacking it. But because of its size, it appeared mapusaurus could just simply snack, with the victim later dying of disease.

The victim of the Mapusaurus attack eventually died of blood loss. A flock of Lacusovagus circled it like vultures. A bunch of Skorpiovenators came to the Argentinosaurus to feed. Hours later, Mapusaurus came to eat, scaring away Skorpiovenators in the process. The Skorpiovenator Still tried to come and grab food but the Mapusaurus would scare them off every time, The Days passed and the competition for food became fierce. A few days later, all that was left of the giant dinosaur were its' bones.

This episode ends with the statement that when Argentinosaurus became extinct, Mapusaurus soon followed.

It was mentioned when the narrator was explaining the effect of insular dwarfism on islands. A size scale between it, Magyarosaurus, and Ampelosaurus was show. Argentinosaurus was also seen in the section South American dinosaurs.

An Argentinosaurus with a Gasparinisaura.

An Argentinosaurus on its rear legs. 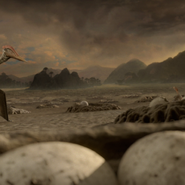 A Nest of Argentinosaurus eggs. 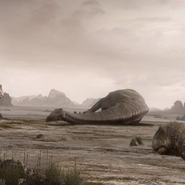 A dead Argentinosaurus being approached by a Skorpiovenator.